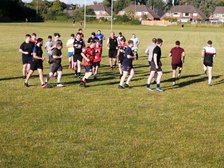 Pre-season training is back in full swing in readiness for the 2022/23 season.

Next season, the First Team will be playing in a new division alongside old favourites from the former ADM Premier League;

They will be joined by the following teams from the former RFU North 2 West;

The Second Team will be competing in a revised Combination League, whilst the Thirds will be taking their place in Division Four West of the Halbro Leagues.

Training is every Tuesday and Thursday at the Club commencing at 6.45pm.

Senior players of all ages and abilities are welcomed. So, if you are looking for a game having recently moved into the area, or looking to get back involved, then why not come on down to Heath Road, where a warm welcome awaits. Alternatively, you can contact Head coach, Andy McIntosh on 07711 898383